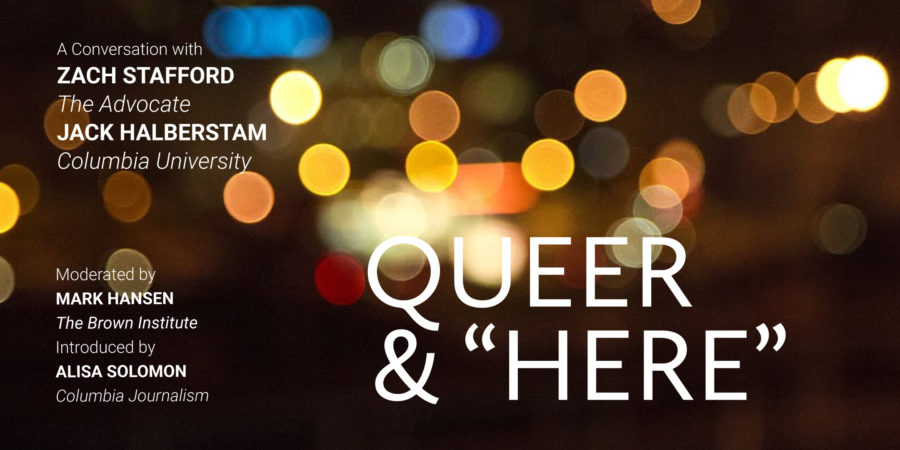 From hookup apps to investigative reporting, community-building to historical archiving, the Internet has transformed queer experience and visibility. What have these changes wrought? What gains? What losses?

In a free-wheeling and frank conversation, Zach Stafford, editor-in-chief of the U.S.’s oldest LGBTQ news magazine, The Advocate, and Jack Halberstam, queer scholar and professor of English and Gender Studies at Columbia University, will consider the roles the digital realm has played in queer communities, how it has made space for queer narratives traditionally devalued in mainstream media, and ways it has reshaped the very meanings of genders and sexualities – even as it has delivered sexual minorities to marketers and exposed vulnerable queer people to aggression.

The conversation introduces Queer Disruptions 3, an international conference celebrating GLQ’s 25th anniversary and looking back on the seminal conference Black Nations/Queer Nations from 1995.

Jack Halberstam, a professor of gender studies and English at Columbia University. is the author of six books including: Skin Shows: Gothic Horror and the Technology of Monsters(Duke UP, 1995), Female Masculinity (Duke UP, 1998), In A Queer Time and Place (NYU Press, 2005), The Queer Art of Failure (Duke UP, 2011), Gaga Feminism: Sex, Gender, and the End of Normal (Beacon Press, 2012), and, most recently, a short book titled Trans: A Quick and Quirky Account of Gender Variance (University of California Press). Among other projects, Halberstam is currently working on a book titled Wild Thing: Queer Theory after Nature, on queer anarchy, performance, and protest culture the intersections among animality, the human, and the environment.

Zach Stafford is the newly named editor-in-chief of The Advcoate, the oldest continuously published LGBTQ periodical in the US, a position he assumes after serving as editor-in-chief of INTO, the LGBTQ digital magazine that quickly became one of the most-read queer outlets in the world. Previously he served as the editor-at-large of OUT Magazine and was an award-winning journalist at The Guardian, where he covered justice, violence, and social issues in both his column and long-form features. Stafford regularly provides commentary on radio and podcasts and has appeared on the BBC, CNN and The Daily Show with Trevor Noah. He the coeditor of the bestselling book Boys, An Anthology and the executive producer/host of the recent documentary BOYSTOWN.

Mark Hansen, professor at Columbia’s Graduate School of Journalism and director of its Brown Institute for Media Innovation, has been working for nearly three decades at the intersection of data, art and technology. He serves as the faculty sponsor of the Journalism School’s chapter of the NGLJA: The Association of LGBTQ Journalists.

The Brown Institute for Media Innovation

CUJ Chapter of NGLJA: The Association of LGBTQ Journalists