Podcast legend Dan Carlin will visit the Brown Institute at Stanford on October 11 at 6:30 PM, in the first of the 2016-2017 Media Innovators Speaker Series. The host of the hugely popular Hardcore History and Common Sense podcasts will discuss the state of platform, the American media, and the recent surge in the popularity of podcasts with Stanford Brown Director, Maneesh Agrawala. Free tickets and further information are available on Eventbrite.

Also join us on November 14 when we host Google’s Vice President of News, Richard Gingras. Tickets are available for that event here. The talk will start at 6:00 PM. 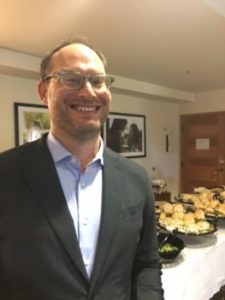 Brown@Stanford hosted The Atlantic writer and author of Word Without Mind: The Existential Threat of Big Tech Franklin Foer, to discuss the issues he raises in his latest book. Mr. Foer cautioned the audience not to offer their personal data so freely, and discussed issues evolving from the creep of technology into nearly every facet of modern life. This event was co-sponsored by the Freeman Spogli Institute at Stanford University.

Mr. Foer’s talk was the first in the Media Innovation seminar series, a one-credit course organized by the Brown Institute at Stanford. Second in this series was a talk by Ceci Stallsmith of Slack on October 3, who gave an overview to attendees on how to detect emerging trends, though, as she joked, some of it just comes down to “getting lucky.”

These talks, and future talks in the series, can be be view on the Brown Institute for Media Innovation YouTube channel.