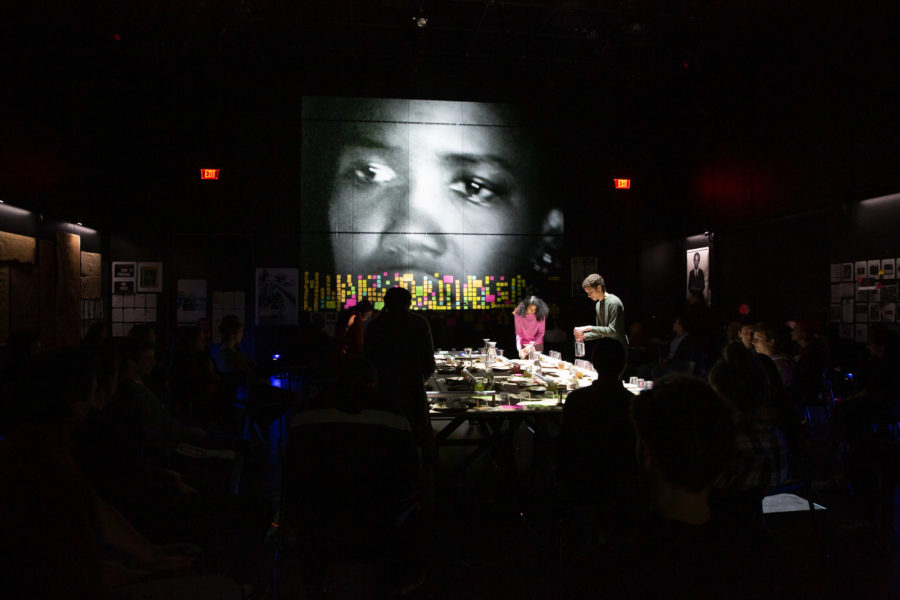 Justin Hicks’ deep voice rolls through the microphone, sending blue light across the dark chamber like a waveform, illuminating on the table in front of me a half eaten piece of corn-on-the-cob and the faces of people who until a few minutes ago were strangers. The light reverbs-out with his voice, hinting at the edges of the cavernous warehouse around me, touching fragments of election memorabilia, snippets of Harper’s Weekly, and Russian tweets meant to mimic ‘Blactivist’ messaging.

This is Casting the Vote: an American Dinner Party, a theatrical meal created as a collaboration between journalist and filmmaker June Cross, and director Charlotte Brathwaite, a three-hour blend of theatrical performance and documentary film centering around an ‘interactive meal’ involving lyrical performances by the cast, and questions posed to the attendees. Unifying the performance was a focus on ‘democracy interference’ , specifically the targeting of race and the fight for the 14th and 15th Amendments.

The idea of using the stage as a medium for journalism is still not commonly practiced, and including a meal in the journalistic conversation, with a conversation taking place around that meal, seems almost entirely new.

The performance was staged for three evenings in April, in which audiences of a few dozen were brought onto the stage in the former warehouse of MIT’s Building W97, home of its Theatre Arts program. It began in a side room, where we were asked to wash our hands with glass carafes of water, which of course required an additional pair of hands, jumpstarting the performance’s focus on community and interaction. Then, one wall of the event space opened and we were led to the stage. The attendees and the cast together set up a dozen tables around the room, as archival footage of voter suppression efforts was projected onto the far wall. A violinist, Sunder Ganglani, walked among the crowd playing a deeply somber but energetic melody.

Cross and the performers said audience participation differed widely from evening to evening, and the play seemed to take on a unique energy each night. Each of the tables was a mix of audience and cast, encouraging us to engage in conversation and mirror the play’s lyrics as the performance went on. These lyrics contained themes of inclusion and exclusion, race, and democracy.

Around my table, everyone introduced themselves — to my left, an MIT undergrad bioengineering major with a minor in theatre. To my right, an MIT undergrad computer science major with a minor in theater, and the cast member who sat at our table, also an undergraduate with ties to the theater program. We were probably the youngest table, introducing ourselves from every side of the US, as well as Peru and Spain. Of those seated at our table, only our cast member had ever had the bitter-sweet collard greens before, part of a meal that included cornbread and sweet-potato pie, a tribute to the “the land of America and also the struggles that different levels of indigenous peoples have faced,” according to Braithwaite.

The factual elements of the event, unearthed and reported by Cross, were mostly told through film — a mash-up of work by Jack Willis, archival imagery from Mississippi State University, elements from the ProPublica project “ElectionLand”, and footage by Cross, shot in Wisconsin under a grant from the Ford Foundation. The montage returned repeatedly to scenes of mostly black voters waiting in lines to vote in the 2016 election because there weren’t any power cords for voting machines. “Power cords,” the cast member seated at my table repeated.

At one point, everyone stood and we were read questions from voter registration tests that have been asked of Americans seeking to vote, dating back to the early 1900s. We were instructed to sit when we couldn’t answer ‘Yes’. I remember questions like “Can you list all of your state senators?”  By the end, no one was standing.

Covering three expansive walls was a deconstruction of the reporting that went into the piece. Clippings from Harper’s, images of Andrew Young and Barbara Jordan, the first two African Americans elected to congress, and a series of tweets provided by John Kelly, the CEO of Graphika, that documented how the Russian intelligence agency had worked behind the scenes to invent ‘blacktivist’ profiles to gain trust and insert dissident political content into the 2016 election. Along the far wall, under the projector, sticky notes reflected attendees’ reactions. One asks, “What is democracy?” and another repeats a Martin Luther King Jr. quote from the lyrics that close out the performance: “The arc of the moral universe is long, but it bends towards justice.” 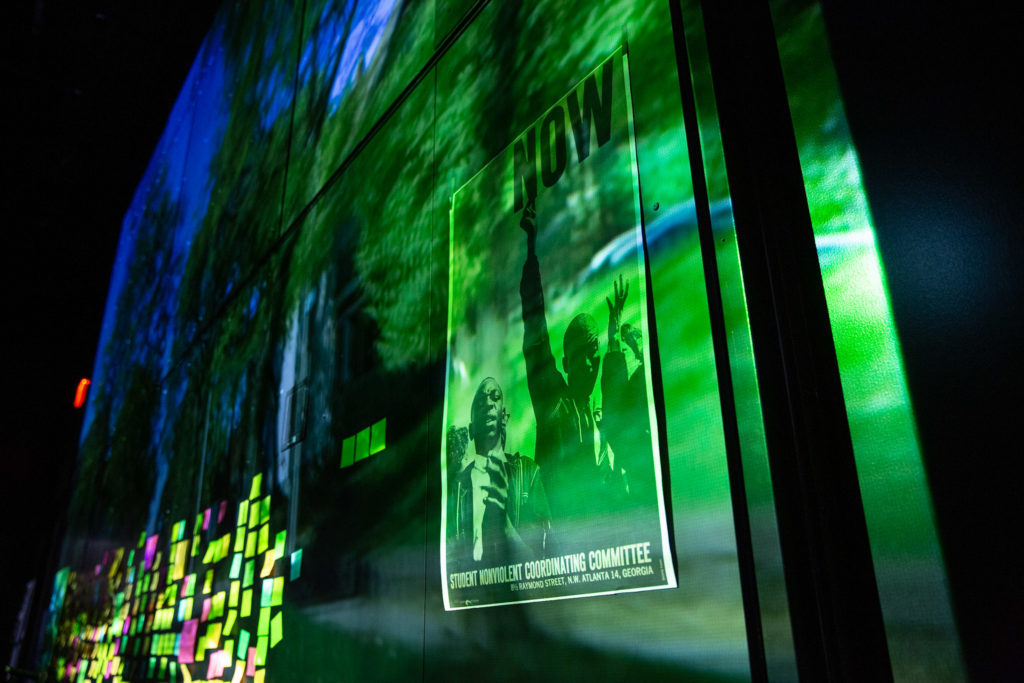