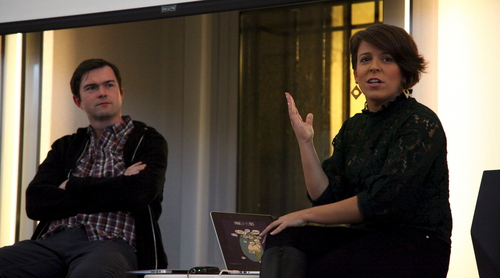 This past weekend at Columbia University, The Brown Institute played host to some of the world’s most prodigious networkers. Not the schmoozing kind nor the TCP/IP and fiber kind, but analysts of the public interest, studying networks of people and documents to map out relationships among the powerful.

Friday evening was kicked off by a conversation with Mar Cabra, the head of the Data and Research Unit of the International Consortium of Investigative Journalists (ICIJ), and Kevin Connor, Director of the Public Accountability Initiative and a co-founder of LittleSis.

Cabra (an alumnae of Columbia Journalism) shared the story of how the team at ICIJ took on their research process for The Panama Papers, 2016’s groundbreaking set of reports coming from leaked documents of Mossack Fonseca, a Panamanian law firm specializing in hiding money from tax services in offshore accounts. ICIJ has become somewhat of a specialist on archival “document dumps”, empowering its member news organizations to collaborate at worldwide scale in researching stories coming from these datasets by looking at connections emerging from those documents and empowering reporters worldwide to collaborate on their stories.

Connor shared the origins of LittleSis, a sort of involuntary Facebook for the 1%. LittleSis is a database of connections between powerful individuals, corporations, and entities, and allows researchers to collect and organize those relationships to organize and explain power structures. The work produced from LittleSis is frequently compared to the work of artist and archivist Mark Lombardi, who who created incredibly researched diagrams of the connections between powerful individuals and shadowy organizations in what has been termed “conspiracy art”. Connor showed how LittleSis has been an incredibly useful tool for journalists researching Congressional corruption and good-government activists.

On Saturday, 24 students from Columbia Journalism spent the day with the team from Neo Technologies, the company behind the open source graph database neo4j, an open source graph database used by ICIJ’s work with The Panama Papers. Students dug into the connections of individuals and businesses associated with Donald Trump, using Buzzfeed’s open Trumpworld dataset. Over the course of the day, they learned about how to think about querying across networks of data, finding the closest connections that might be story tips, and how to augment their graph data with external datasets. If you’re interested in learning the same, William Hunger from neo4j has published a tutorial for working with the same data that goes through most of the same material.

You can find out more information on upcoming Transparency talks at Columbia at transparency.brown.columbia.edu.