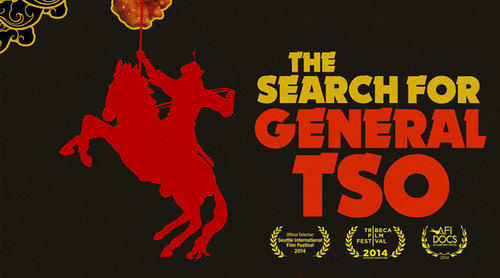 Food from Pei Wei and Panda Express greeted guests at the Brown Institute’s first ever movie night on Wednesday, February 1.

The Chinese food helped guests get in the mood for the evening’s event: A screening of Brown Institute Fellow Jennifer 8. Lee’s documentary “The Search for General Tso.” The film debuted at the 2014 Tribeca Film Festival and now is available on Netflix.

The documentary mixes humor and international reporting and tells a story of Ms. Lee’s hunt to unearth the obscure origins of one of America’s favorite Chinese dishes: General Tso’s chicken.

Told through the lens of food,  Lee and her fellow filmmakers illuminate the story of the Chinese experience in the U.S., starting with the story of turn-of-the-century Chinese immigrants, and how they adapted to life in the U.S. while facing racism and xenophobia. Along the way, they taste tested General Tso’s chicken dishes at Chinese restaurants from Florida to San Francisco and Taipei to Hunan, China.

On Feb. 15 at 5pm, the Brown Institute will host another movie night featuring the Oscar award-winning feature film “Spotlight,” which tells the story of the Boston Globe’s investigation into the Catholic church’s child abuse scandal. The showing will take place in Wallenberg Hall. RSVP for the screening here.

On Feb. 21 at 7:30 pm, the Institute will host Washington Post Executive Editor Marty Baron for a conversation about the current state of journalism. RSVP for the Baron event in CEMEX Auditorium on the Stanford camp here.