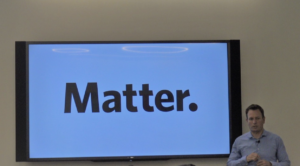 Ford discussed key shifts in the media landscape since founding Matter in 2012. “We are at a pretty interesting time,” said Ford, who pointed out that media institutions are under threat both economically and culturally. “Without media ecosystems, we won’t have a strong democracy,” he cautioned.

Ford described how Matter has built a culture of experimentation for media entrepreneurs, encouraging them to embrace ambiguity and “fail forward.”

Back in 2009, New York University Professor Clay Shirky wrote a widely-read essay Newspapers and Thinking the Unthinkable.” In it, he asked: “If the old model is broken, what will work in its place? The answer is: Nothing will work, but everything might. Now is the time for lots and lots of experiments.”

Ford echoes that philosophy and says Matter backs early-stage media ventures and entrepreneurs who are eager to experiment.

Matter has launched 73 media start-ups.  They have found opportunity in tackling what, at first glance might appear to be tough challenges, be that increasing advertising revenue, reaching more diverse audiences, catching the wave of a new media trend like podcasting, or exploiting new technologies such as Blockchain.

While Matter is a for-profit venture Ford stressed that it is “mission driven.” Indeed, Matter’s philosophy is “changing media for good.”

Now raising its third fund, Matter has seen a 1.7X return on investment capital, Ford said. Several portfolio companies have been snapped up by bigger media players including Buzzfeed, change.org, Medium, and Quora among others. Matter’s  investors include larger media partners such as KQED, the Associated Press, Google, The New York Times, McClatchy, and the Knight Foundation, among others.

While the media companies are out for a financial return, the organizations also benefit from Matter’s expertise in building what Ford calls “a culture of innovation,” often a challenge for large media companies.

Ford says investing in the media space is risky, but Matter has figured out a way to “squeeze out the risk.” He describes a two-pronged approach. “We make risky investments knowing most will fail,” he says. At the same time, Matter’s media partners participate in the design and incubation process at Matter, increasing their exposure to new ideas, technology and talent that can change their organizations. The upshot, he says: “Media is better overall.”