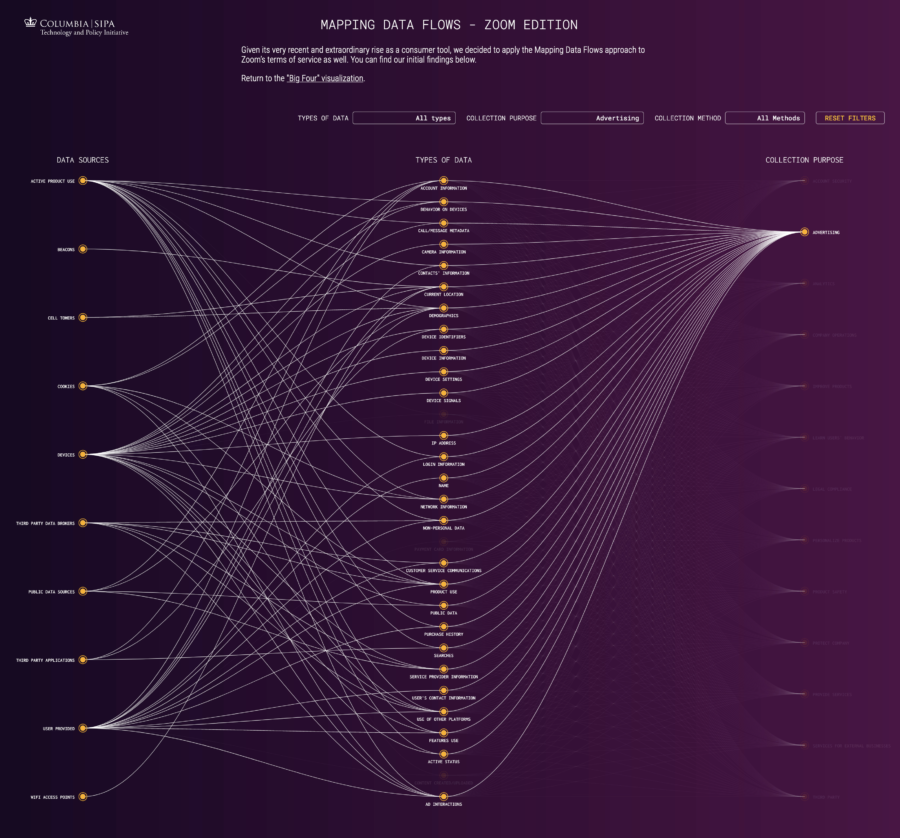 Video conferencing app Zoom has surged in popularity due to the coronavirus pandemic, prompting the questions: what data can the company collect about our conversations, and what could they do with it? Those questions were answered by the researchers behind Mapping Data Flows —  John Batelle, Senior Research Scholar and Adjunct Professor at Columbia’s School for International and Public Affairs (SIPA), Juan Francisco Saldarriaga, Senior Data and Design Researcher at The Brown Institute, Columbia Journalism School M.S. graduates Matthew Albasi and Veronica Penney, and SIPA M.S. students Zoe Martin and Natasha Bhuta.

Mapping Data Flows began as an investigation into the data usage of the “Big Four” tech companies, Apple, Amazon, Facebook, and Google. The researchers catalogued every type of data that could be collected by each company, from credit card information and social security numbers to biometrics and camera feeds, and identified how each could be legally used by the company according to their Terms of Service (TOS). Last month, they did the same for Zoom: they read through the company’s Terms of Service and painstakingly catalogued which user data could be used for purposes such as ad personalization.

One of their major findings? “If Zoom wanted to, it could very easily become an advertising business.” says The Brown Institute’s Saldarriaga. “They could certainly start advertising to customers tomorrow and not violate their Terms of Services or privacy policy,” according to Albasi, one of the researchers who read through the documents.

They found that while Zoom will not directly share user information collected via their app with marketers, they would be capable of selling ads that target users based on the data they do collect, similar to Facebook’s advertising model.

Deciphering Zoom’s data usage policies into clear, unambiguous definitions as the researchers did was challenging. “The Terms of Service are written in the most broad and vague way possible. It’s almost impossible to find an instance where they say ‘We collect this, this, and only this and use it for only this, this, and that,’” says Saldarriaga. To help understand the complicated flow of data a company collects about its users, Saldarriaga built an interactive visualization that filters their TOS by data source, type, and collection purpose to examine the kinds of things they could do with your information. 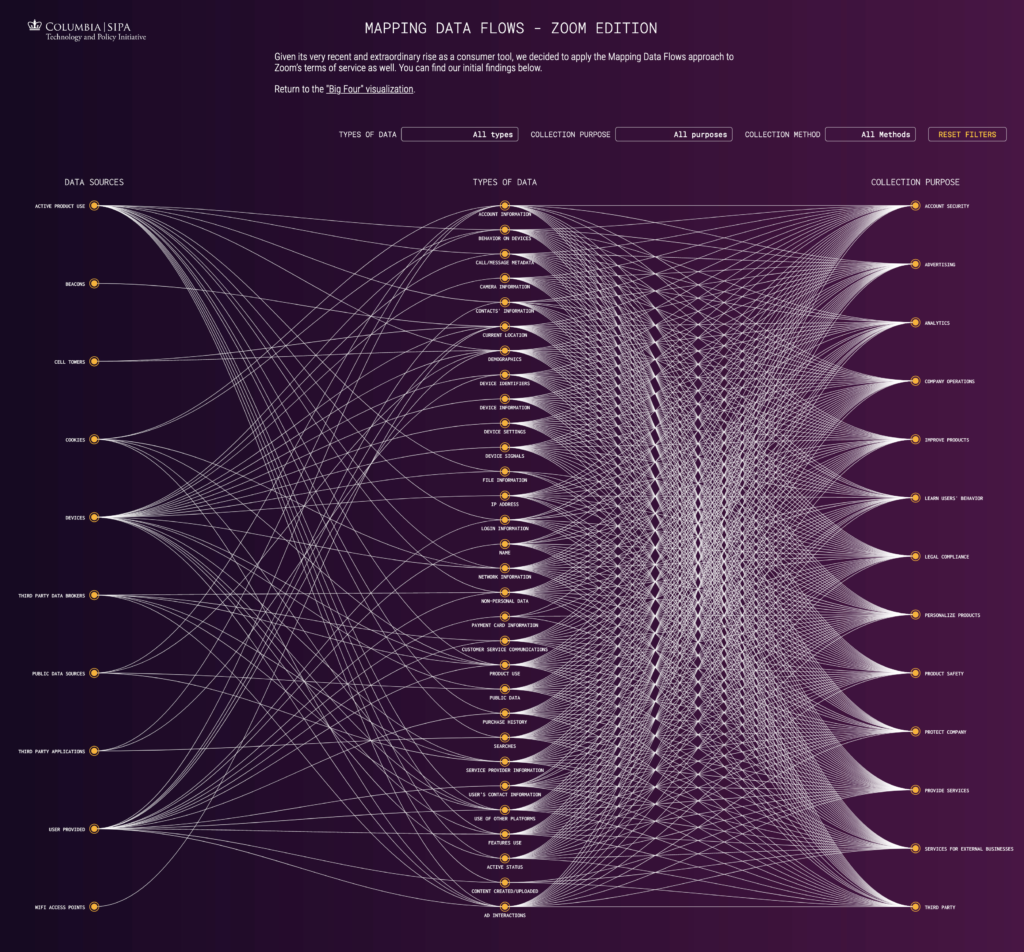 For example, here is a somewhat typical excerpt from the Zoom TOS:

The Mapping researchers realized early into their initial analysis of the Big Four that the data usage patterns of these major tech companies are extremely similar to one another. That their Terms of Service and Privacy policies read similarly flies contrary to what many consumers might expect, since many perceive Apple as a data privacy advocate in contrast to, say, Facebook.

They found that Zoom’s data usage also holds to many of these trends, though, according to SIPA’s Martin, “their privacy policy is not nearly as carefully worded.” Their privacy policy was originally designed for companies and universities, rather than for individuals. “They allow meeting hosts… a lot of access and a lot of power and that’s mostly what the privacy policy is geared towards,” says Martin. For instance, hosts receive personal information for members of the call, and the app will share recorded calls with other people within an organization even if they did not attend the meeting.

For a detailed analysis of Zoom’s business model and a comprehensive motivation for the project, read John Batelle’s recent blog post. The full visualization can be accessed at https://mappingdataflows.com/zoom/.

Support for the Mapping Data Flows project was generously provided by SIPA Technology & Policy Initiative, the Brown Institute for Media Innovation, and the Omidyar Network.