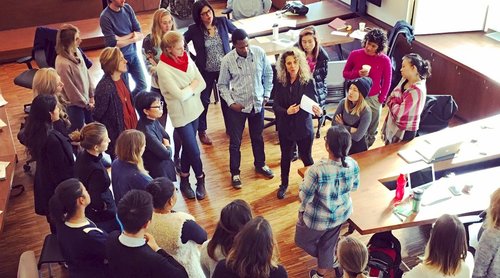 The Brown Institute is delighted to welcome back Ellen Weinstein, a well-known illustrator whose work has appeared in outlets like The New York Times, The Village Voice, Nautilus and The New Republic, to name just a few. On Friday, December 2, Weinstein led a panel on illustration and journalism. Panelists included Andrew Horton, the Creative Director of the Village Voice; Alissa Levin, founder and principal of Point Five; and Victor Juhasz, a prolific political caricaturist. While our discussion was ostensibly about the ways in which illustrators craft stories, we kept returning to the national election.

How do you make sense of it and how do you respond? What should illustrators, and artists in general, be doing? The panel returned to this question in one way or another, whether it was through overtly political satire or more quiet expressions of uncertainty. With a mix of art directors and illustrators on the panel, we started to get a sense of how illustration interacts with the editorial process — how work is commissioned, how ideas develop and how judgements are made about the appropriateness of images.

In the end, we saw the power of the medium, both as its own form of expression, as well as through its ability to elevate journalism.

Some details. Andrew Horton oversaw the design of The Village Voice covers during the election cycle, creating illustrations about Clinton being “her own worst enemy,” the Republican National Convention, and, just a week before the election, the impact of Trump’s candidacy on the U.S. Horton opened his process, showing works in various stages before publication and describing when drawings had gone “too far.” Alissa Levin and her company Point Fivehave worked with publications like Harpers, Nautilus, and even our own Columbia Journalism Review. Levin discussed a range of projects she’s supervised and her different strategies for developing illustrations. Victor Juhasz presented sketches during his time embedded as a “combat artist” with a MEDEVAC unit in Kandahar, Afghanistan. These were powerful works, often drawn during rescue missions. We also saw a fair number of Juhasz’s political satire pieces that commented, sharply, on moments during the election cycle.

Then, Saturday, Weinstein led a packed house of journalism students through a set of exercises, prompts for drawing. First, fast sketching around big words – “climate,” “identity,” “bullying,” and so on. Then, we paired off and took turns as editor and illustrator, creating an image for two of three articles Weinstein provided. The energy around this task was amazing. Weinstein is a true professional and her critique ranges from the practical to the profound. We closed the day with students considering their own projects and how they could add illustration. Weinstein’s advice was to distill the story into one sentence — that process of reduction leads to an effective back and forth with visual ideas. We closed with a detailed critique from Weinstein, again insightful and compelling.

This was the second year we have featured illustration in the Transparency Series, and there will certainly be a third! Thank you, Ellen, for an incredible couple of days.