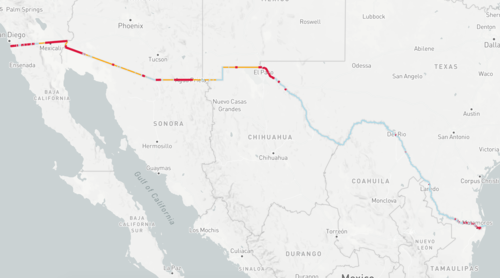 President Donald Trump’s promise to build a border wall along the U.S.-Mexico border is the subject of intense discussion. The immigration debate has raised the question about the current state of the U.S. border protections and what would be needed to build such a wall.

Former Magic Grantee and current Brown staff member Allison McCartney took a look at the question. Working with The Center for Investigative Reporting’s Michael Corey and Andrew Becker (of Reveal, CIR’s nationally-syndicated radio show), the three created an interactive map of the U.S.-Mexico border fence. The map allows viewers to see the existing border fencing already built by the U.S., see what that border fence actually looks like, how much has yet to be built, and identify locations that represent quirks or issues with the current border fence.

The work accompanies the latest episode of the Reveal podcast, “Up against the wall,” and builds on years of research and reporting by the Reveal team. In addition to traditionally reported stories, the data team at Reveal created the border fence data set using open source mapping software, and released the data to the public today, March 3, 2017, at the NICAR conference in Jacksonville, Florida.