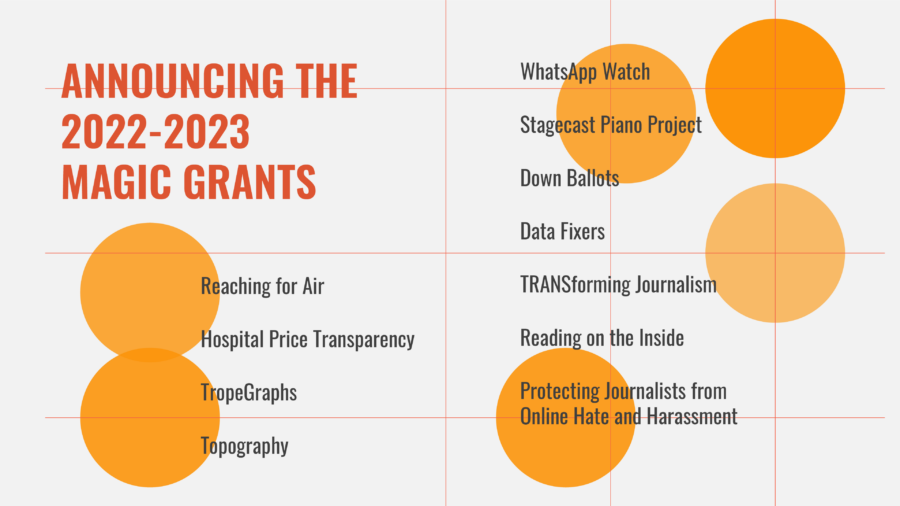 The Brown Institute for Media Innovation, a collaboration between Stanford University’s School of Engineering and Columbia Journalism School, is proud to announce its 2022-2023 Magic Grant recipients!

This year Brown awarded eight Magic Grants and three “seed” grants. Some of the winning teams are proposing tools to stretch our creativity, while others are developing new technologies for reporting on important social and political situations.

The Brown Institute was established in 2012 with a generous gift from longtime Cosmopolitan magazine editor and author Helen Gurley Brown. It was inspired by the memory of Gurley Brown’s late husband, David Brown, a graduate of both the Columbia School of Journalism and Stanford University.

Through its Magic Grants, the Institute encourages unique interdisciplinary collaborations. As Gurley Brown put it, “Sharing a language is where this magic happens.”

Today we celebrate Brown’s  eleventh cohort of grantees — each is working on a project addressing an important contemporary question, be it political, cultural or technical. This year’s awards include:

A complete list of this year’s Magic Grants is available below and on the Brown Institute’s website. This year we are also delighted to acknowledge additional support for our grants from PBS FRONTLINE.

Congratulations to our winners. We cannot wait to see what you create!

Full descriptions of the 2022-2023 Magic Grants can be found below.

Many journalists — particularly women journalists and journalists of color — experience overwhelming social media harassment when they attempt to engage with readers on Twitter. The team behind A Community-Driven Tool to Protect Journalists from Online Hate and Harassment will build a tool that gives journalists the power to filter out harassment using machine learning models based on journalist-provided examples of harassment. This could ultimately reduce the harms associated with persistent online violence and let journalists focus on what they do best — telling groundbreaking stories and disseminating them to a wide audience.

Land grabbing is often linked to illegal deforestation in the Amazon Rainforest. Investigating these crimes in Brazil requires multiple databases spread among dozens of agencies and several government branches. Data is often delayed or even denied due to privacy laws. Data Fixers will get and organize these records and write stories with them, partnering with news outlets in Brazil and abroad. The data will also be made available to other journalists and researchers in two online platforms, Aleph, designed by the Organized Crime and Corruption Reporting Project (OCCRP), and Google Pinpoint collections. A newsletter will also share insights about the data in Portuguese and English.

Most newsrooms offer live election coverage as vote totals become available, but there’s no easy way to get live, hyper-local tallies, which means that editors and designers are forced to focus on covering only the most high-profile races. This leaves community members unable to receive coverage of ‘down-ballot’ races in smaller municipalities. Down Ballots seeks to create a tool that will ingest hyper-local vote totals and quickly generate dynamic visualizations for live election coverage. The team’s goal is to refine its existing prototype for use in the 2022 Midterm Elections and partner with 20+ newsrooms in California, Texas, and Connecticut who will use the system for live election visualizations.

This Open Hospital Prices initiative aims to reduce hospital bills in the United States through price transparency. While the federal government mandates hospitals release their prices, this data comes in a variety of obscure formats that are not accessible to an average person. Our project begins by collecting this data and building machine learning tools to evaluate these lists despite differences in medical jargon. We then open-source this data and make a toolkit to help consumers compare prices, and work with local news organizations to give practical advice linked to anecdotal stories. The end result is that consumers have the guidance they need to find healthcare at an affordable price.

Salt Lake ranked 12th on a list of the 25 U.S. counties most polluted by ozone. But no other place in Utah compares to the west side of Salt Lake City, where the legacy of redlining practices is still in place with a disproportionate presence of polluting industries. This area is also the home of low-income marginalized communities that face health disparities. Reaching for Air would tell this story in a news app hosted by The Salt Lake Tribune. The goal is to combine data with human experience. Besides including air quality conditions, and identifying the biggest polluters on the west side, the app would collect 100 first-person air pollution audio stories from west-side residents.

It takes just a fraction of a second for data to travel between the two coasts of the United States, but that is long enough to make it impossible for musicians to play a live duet over the internet — each musician hears notes from their partner that are roughly one sixteenth note late. Stagecast Piano Project plans to use machine learning to predict what notes each partner will play and create a projected partner audio feed for each musician. The team’s goal is to stage a live, four-hand, bicoastal piano duet within a year and ultimately to enable a wide variety of online musical collaborations that are currently impossible.

Though stories are highly structured around a set of narrative conventions called tropes, even professional storytellers have a hard time mapping out the series of climaxes and resolutions that constitute a plot. The goal of the Tropegraphs team is to use machine learning models trained on a community-maintained repository of tropes to help creators brainstorm, outline, and write possible story structures.

Whatsapp Watch is a platform for monitoring how misinformation spreads through Whatsapp groups. The project will focus on working with journalists in the Global South – in countries like India, Brazil and the Philippines where the application is very popular. Big Tech companies are notorious for lax oversight and invasive surveillance in these regions, and the harm posed by these conditions can be life-threatening. This project provides technical support and access to data to journalists to allow them to report on this important topic.

Reading on the Inside

Topography is a multimedia documentary project exploring the layered perspectives defining America’s public lands. The project uses technologies including photogrammetry, game engines, and augmented reality to transform documentary footage captured in U.S. National Parks into explorable spaces. Transporting the viewer across time, species, scale, and histories, the team will prototype a multi-sensory experience designed to create new embodied ways of seeing. Informed by research into effective climate and environmental communication practices, these spaces will be centered around careful noticing of the natural world, the contested histories that shape our understanding, and the looming climatic changes that threaten to unbalance and undermine it.

In a 24/7 news cycle, coverage of trans communities takes limited forms – these stories are often focused on hot-button political topics, and for trans communities of color, specifically, mostly scandalous news like murder and sexual assault. Not only are these stories limited in scope, they often deadname and misgender sources, effectively retraumatizing trans people of color and their communities. This journalism crisis runs rampant partly because of a lack of trans journalists of color in positions of power in newsrooms across the United States, or in them at all. TRANSforming Journalism tackles this crisis by way of a docuseries that follows five trans journalists of color on their passion projects in trans communities of color, and how the people within them are ensuring their own survival and success.