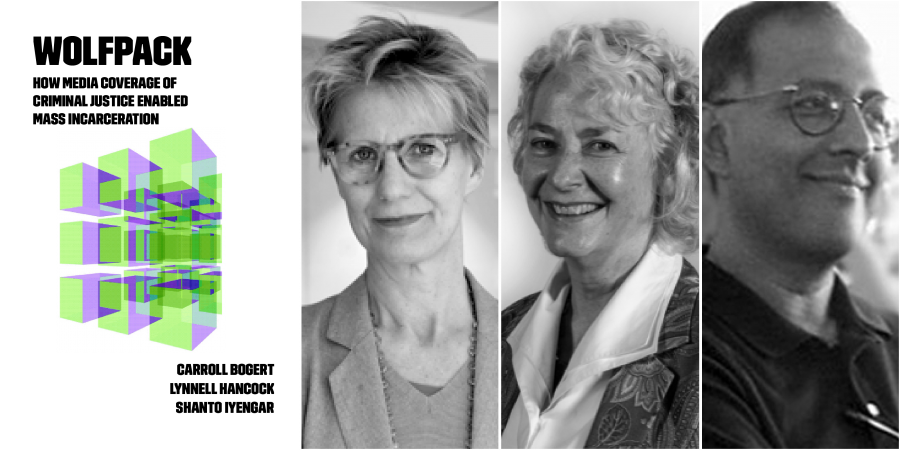 Our 2020-21 Magic Grant Wolf Pack examines for the first time how media coverage of criminal justice helped turn the United States into the most incarcerated country in the world. In collaboration with data scientists at both Stanford and Columbia, the team is preparing a database of national and local media coverage of criminal justice and, through Natural Language Processing techniques, revealing the framing and narrative structure, and especially the racial and ethnic clues, embedded in this coverage. The lessons from this project will inevitably provide historical framing for contemporary events.

Here’s a (lightly) edited version of the interview with LynNell Hancock from Columbia University, and Matthew Tyler from Stanford University, both part the Wolf Pack team.

What was the main impetus for your project? Where did the idea come from?

LH: It’s hard to identify one main impetus, but perhaps the first trigger for the project came from our mutual outrage over the wrongful convictions of the Central Park Five in 1989; and the fact that the news media has managed over the decades to escape serious scrutiny and serious reckoning for its role in railroading those young men into prison. Carroll [Bogert] and I wanted to expand the lens from New York media to the nation, and to dip back into history to systematically examine the myriad ways the news media helped create the most incarcerated nation in the world.

We believed that the best approach would combine old-fashioned journalistic reporting on the ground with original data analysis. The former for context, the
latter for as yet elusive hard evidence that links and patterns exist between news coverage and criminal justice policies. The 80s and 90s felt like the obvious decades to focus on for collecting news coverage, since they represent the time period when incarceration rates were breaking all records just as crime rates – starting in the 90s – were falling.

Another impetus for this project came from our mutual experience working as journalists at Newsweek magazine during its waning heyday in the 90s. We
witnessed the incestuous spiral of news influence between the elite media and the policymakers in Washington. As far as crime news went, Newsweek was way out front when it came to the volume of stories it produced on gang crime, on amplifying bogus theories about predator teens, and on all those issues that racialized criminals and pumped up white readers’ fear of the other. We felt it was important and new to examine the role of Newsweek and its competitors in the late 90s, when some of the nation’s harshest federal and state crime policies were codified into law.

Even though your project is a historical one, there are certainly incredibly strong connections to the present and the Black Lives Matter movement. How have the events of the past year influenced your project?

LH: The movement has certainly given the project a lot of oxygen and validation. Black Lives Matter evolved as a movement many years earlier, but the horrific police murder of George Floyd last year shifted the conversation, opening the eyes and ears of larger numbers of white Americans, at least for the moment, to the reality of systemic racism in the criminal justice system. I opened the paper this morning (late April) to see an analysis of the Derek Chauvin conviction that resonated with what we’re trying to do. The argument was that prosecutors managed to get a guilty verdict because they did something unusual – they humanized the crime suspect, George Floyd. It sounds so tragically simple. Why is this a new phenomenon? The media, we believe throughout the years, contributed to this twisted narrative of crime and punishment. We plan to turn the lens on the ways the media helped dehumanize crime suspects and failed in its basic role to challenge the police versions of events, decade after decade.

MT: It’s easy to imagine how decades of over-reporting on criminal justice topics could lead to a culture where frequent police-on-civilian violence has been considered acceptable – despite crime rates falling across the nation. Recent events have pushed us to measure how news coverage has influenced policies surrounding police accountability and the use of force. This is something we’re able to do by examining the texts of legislation enacted in each state over our time period.

Going forward, we also plan on comparing news coverage of police-on-civilian violence in market-dominant news outlets versus minority-owned new outlets. We have reasons to expect that the volume and types of coverage will differ based on the different perspectives offered by these two categories of media.

MT: By far the most difficult part of this project was always going to be finding and then gaining access to a long list of data collections we need to link together for our analyses. I can’t speak for everyone, but I’m personally pleased we’ve been able to assemble what has to be the most comprehensive database on historic news coverage for our time period.

Any publications or conferences where you’ve showcased your project?

LH: The Marshall Project published a package of stories featuring our research on the spread of the superpredator myth throughout the national and local media, and the tragic political and human consequences. Included was a feature-length piece by Carroll [Bogert], a first-person interview with a young man who was called a superpredator at age 14 when he was convicted in the 90s, and an interactive graphic of the coverage. NBC.com ran the story on its site, along with an original video.

The data visualization graphic based on the database of superpredator mentions won an “award of excellence” from the Society for News Design. The superpredator story was featured in the Marshall Project’s inaugural episode of its new video broadcast initiative for incarcerated audiences. “Inside Story” plans to reach 232 facilities in 35 states.

In the works: We’re currently marketing a second feature on Denver’s 1993 “Summer of Violence” for magazine publication. The story digs into an overheated
summer of non-stop media coverage of a juvenile crime wave – a crime wave that turned out not to exist. The facts didn’t stop the state of Colorado from overhauling its storied juvenile justice system, installing harsh penalties for kids that are still being felt today.

Where do you hope to have the biggest impact?

LH: We have several audiences in mind, besides members of the general public interested in criminal justice issues and the media. One important target audience
includes the editors, journalists, publishers of major newspapers and broadcast news outlets across the U.S. A mark of success for us would be if the work inspires
more and more news organizations to take a hard look at their crime coverage past and present, and reckon with the harm it has done.

Our data partners at Stanford University are constructing the database of coverage in a way that will be useful and accessible to criminal justice advocates, academics, students and teachers. It has the potential to spawn more research and reforms.

MT: Our project has the potential to change how journalists, politicians, and voters think about the crime reporting they read (or write) and the stereotypes they use. If we can get voters, journalists, and politicians to think about how their perceptions, stereotypes, and political decisions are influenced by seemingly-perfunctory crime reporting, then I think we will have been successful.

LH: We are working on a book proposal about media coverage of criminal justice in the 1980s and 90s, and how it paved the way for mass incarceration. The analysis of the database will inform our journalism going forward. We plan to develop teaching and learning materials for use in newsrooms and schools.

MT: We’re at the main analytical stage of our project. We’re currently mapping the terabytes of data we’ve collected onto our measures of interest and showing precisely how much crime reporting is affecting political rhetoric and legislative activity.