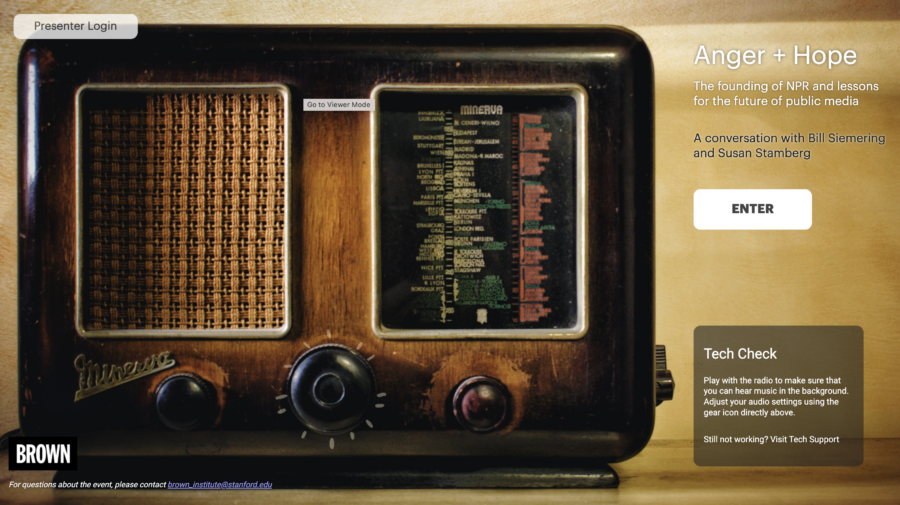 On February 17, 2022, Brown Institute Entrepreneur-in-Residence Steve Henn hosted a conversation with Susan Stamberg and Bill Siemering on the founding of NPR and lessons for the future of public media. Watch the video below and stay tuned for future events posted on our events calendar.

The event took place in a special virtual environment designed in ohyay.co. It was created by our Deputy Director Michael Krisch, Brown Institute fellow Ross Ewald and Steve Henn. Have a look!

Bio’s for the speakers

Bill Siemering is a radio visionary. Sixty years ago, Siemering was hired to transform WBFO from a student-run college radio club into a professional station. Because of the experiments in radio that he led at WBFO throughout the 1960s, Siemering was invited to serve on the first board of what would become National Public Radio. He was also invited to write the original mission statement of NPR—while he was still working in Buffalo. Siemering went on to help create NPR’s flagship program, All Things Considered and also what we know today as Fresh Air. Fifty years later, Siemering is still passionate about the power of radio, now doing much of his work in the developing world.

Nationally renowned broadcast journalist Susan Stamberg is a special correspondent for NPR. Stamberg is the first woman to anchor a national nightly news program, and has won every major award in broadcasting. She has been inducted into the Broadcasting Hall of Fame and the Radio Hall of Fame. An NPR “founding mother,” Stamberg has been on staff since the network began in 1971. Beginning in 1972, Stamberg served as co-host of NPR’s award-winning newsmagazine All Things Considered for 14 years. She then hosted Weekend Edition Sunday, and now reports on cultural issues for Morning Edition and Weekend Edition Saturday.

Steve Henn is an Entrepreneur in Residence at the Brown Institute for Media Innovation at Stanford University. He is passionate about using technology to reach new audiences and support business models that enable rigorous, in-depth journalism. In 2016 Steve co-founded 60db, a podcast platform and recommendation engine that was acquired by Google. Before that Steve spent years working as a public radio reporter and a senior correspondent NPR, Planet Money, and Marketplace. Reporting gave Steve the chance to cover Washington DC’s lobbying industry, private military contractors, work and family issues, child labor, and the technology industry’s growing role in reshaping our society.

* Please do not download and rebroadcast video from this event.