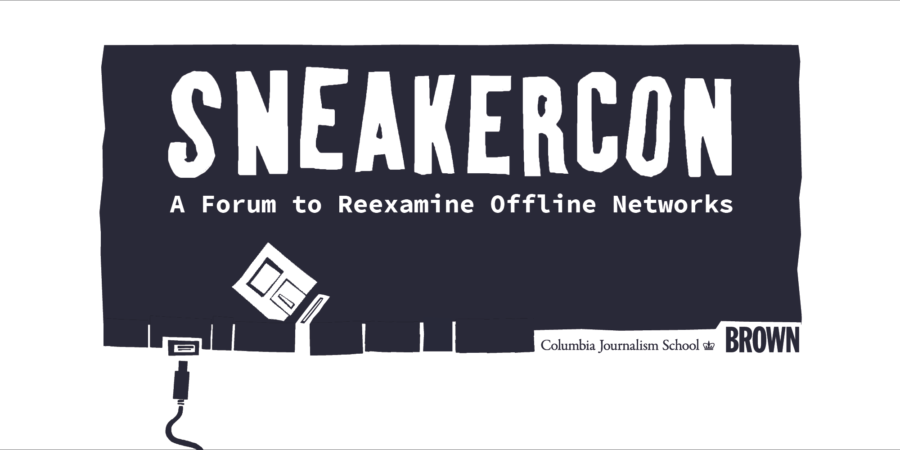 The  Internet has grown so omnipresent today that it’s easy to overlook the continuing role of “offline networks,” systems for exchanging digital information that bypass the Internet. “Sneakernets” (by which we mean any kind of offline networking, a slight abuse of the terminology) take many forms, whether it’s a thumb drive passed between friends or a semi-trailer truck full of hard drives delivered to a server farm, or games played over a private network. Sneakernets form countless links in our digital infrastructure, but nevertheless tend to pass unnoticed in favor of a totalized, global Internet. The purpose of Sneakercon is to reexamine the offline side of the digital age by foregrounding the prevalence, variety, and uses of offline networks during two days of talks, discussion panels, and workshops.
Sneakernets serve many purposes: to overcome transmission limits, to circumvent surveillance, to foster community, or simply for convenience. Companies like Google and Amazon have found that massive collections of data sometimes travel more quickly by physically moving hard drives from place to place. A whistleblower may decide that delivering a tranche of data to a reporter through the postal service would pose fewer risks than contacting them electronically. Meshnets may provide communications in times of crisis or upheaval, when online network infrastructure may be damaged by severe weather or shut off by the authorities. Even when friends or coworkers share files in person, they may casually opt for some offline method despite the ready availability of the Internet.
Studying unique sneakernets around the world can reveal the complexity and variety of information ecosystems in different cultures, subcultures, movements, and communities. Before the Internet was widely available in Cuba, a static, offline slice of the Web called El Paquete was regularly downloaded in Spain, transported to Havana, and then transmitted through a network of dedicated readers who shared each new edition by copying it in person from drive to drive. During the ‘Umbrella Revolution’ in Hong Kong, students coordinated their protest using a mesh network rather than risk using centralized communications infrastructure. In Afghanistan, some people create a custom ringtone and share it only with friends and allies, then the tone is treated as evidence of their social connection when they encounter mutual acquaintances.
Even some historical, non-digital sneakernets could be considered precursors of alternative information networks in use today. The SecureDrop anonymous whistleblowing platform was originally called ‘Dead Drop’ in reference to hidden locations where spies could exchange parcels without having to meet in person. Similarly, in the USSR, where publishing was strictly controlled by censors, dissident writers organized underground newspapers called samizdat that both collected articles and distributed each issue in a hand-to-hand, no-questions-asked network so that the route to the publishers could not be retraced by investigators. As a model of anonymous information exchange, this bears a striking resemblance to onion routing, the system that secures web traffic over the Tor browser via a network of nodes with strictly limited knowledge of one another. These precursors and parallels highlight that even online systems may take on certain qualities of a sneakernet in the interest of security, privacy, or anonymity.
The inaugural Sneakercon will convene on August 25-26, 2017, at Columbia’s Brown Institute for Media Innovation. Our audience of journalists, academics, developers, activists, and artists will collectively learn how to notice, measure, map, and otherwise make sense of an offline network — while bearing in mind the potential risks and ethical concerns that may arise when you observe or enter into these communities.
Keynote talks by Nathan Freitas and Hans-Christoph Steiner of The Guardian Project will highlight the political and social stakes of sneakernets today. Lectures and panel discussions will provide a forum for experts to discuss the significance of different case studies and highlight both the challenges and the promise of offline networks. Finally, a series of workshops will allow the audience to focus on the specific technical, journalistic, ethical, or practical aspects of sneakernets that interest them most.