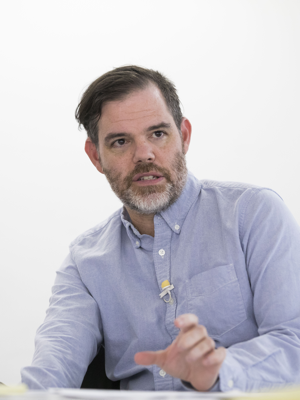 An alumnus of the Sundance Screenwriting Lab, Lance Weiler is recognized as a pioneer in mixing storytelling and technology. He was nominated for an International Emmy in digital fiction for his work on Collapsus: The Energy Risk Conspiracy. His collaboration with David Cronenberg entitled, Body/Mind/Change premiered at the TIFF Lightbox and went on to win the American Alliance of Museums Award. In 2018 Lance co-created Frankenstein AI, a multi-year project that explores humanity’s relationship to artificial intelligence through storytelling, performance and immersion. Frankenstein AI was an official selection of the Sundance Film Festival. Weiler’s most recent work entitled, Where There’s Smoke had its world premiere at the Tribeca Film Festival in 2019.

Lance is an Associate Professor of Professional Practice at Columbia University School of the Arts where he is jointly appointed in Film and Theatre. He co-founded the School of the Arts’ Digital Storytelling Lab in 2013.