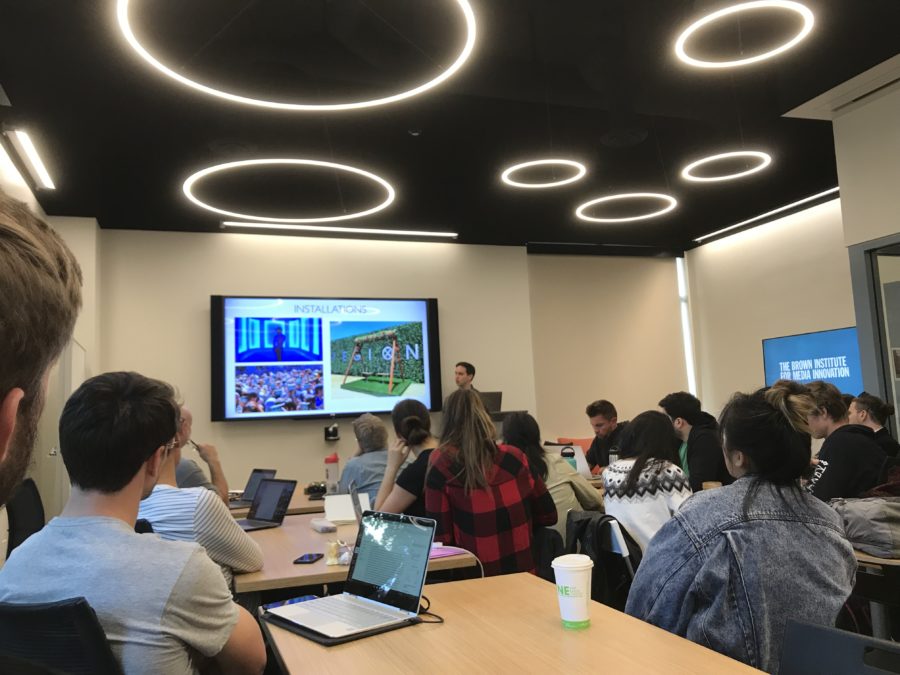 Since its founding in 2012, the Stanford side of Brown manifested  in whichever staff or faculty office or conference room we could grab at the time. As of this academic year, however, we have a home, our own little corner of the Gates Computer Science Building.

The Brown Institute for Media Innovation at Stanford officially opened its own dedicated space in a grand reception held on February 9. Timed to overlap with our regularly-scheduled quarterly “All Hands” meeting, the event brought together current grantees and fellows, alums, staff, faculty, and board members, as well as members of the broader campus and local community, including multiple representatives of Columbia cohort.

Located in Gates 174, the Brown Institute Stanford space took shape in the Gates Building’s former facilities and shipping/receiving area. (These offices have relocated to the basement, with the new construction adjacent allowing for that tangential transition.)  The unique design includes a creative use of the old bay door area, transformed to be a movable wall of windows, opening unto a quaint patio space under the arching redwoods above. This flexibility allows us to implement events both traditional, such as any of the several lectures we’ve held so far this year, to more casual, such as our inaugural Columbia v. Stanford Croquet Derby. We’ve also been able to make use of the technology in the space to hold several “piped in” events. A series of posters displayed in the back of the center, designed by Brown at Columbia’s Rosalie Yu, pay homage to each of the twelve projects being pursued by this year’s grantees.

We hope you have an opportunity to stop by at one of our upcoming events to check out what we have going on. And of course, we look forward to seeing you this summer out on the Croquet pitch.