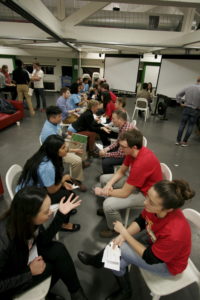 Jan.16-18:  They came, they met, they brainstormed, they prototyped, they presented.

It was the Brown Institute’s first West Coast Base Camp, designed to bring together 10 students from Columbia and 10 from Stanford to learn the basics of Design-School skills, think big thoughts, and share ideas, all with the goal of developing ideas and building bi-coastal teams for next year’s Magic Grant proposals.

The group got going with a round of lightening talks from Stanford faculty and Brown Institute Fellows, then formed six teams and got down to a weekend of work building prototypes that were presented to a review panel Sunday morning.

Problems targeted information sharing among disenfranchised groups, harnassing the universe of data for use by fashion bloggers, verifying Defense Department data for journalists to keep the government accountable, using virtual reality in new ways to tell the story of human impact on oceans, building a network for freelance journalists, and identifying and surfacing conflicting “facts” in news stories.

“I liked that I forgot half way through who was from Stanford and who was from Columbia.” That sentiment appeared to be shared by all.