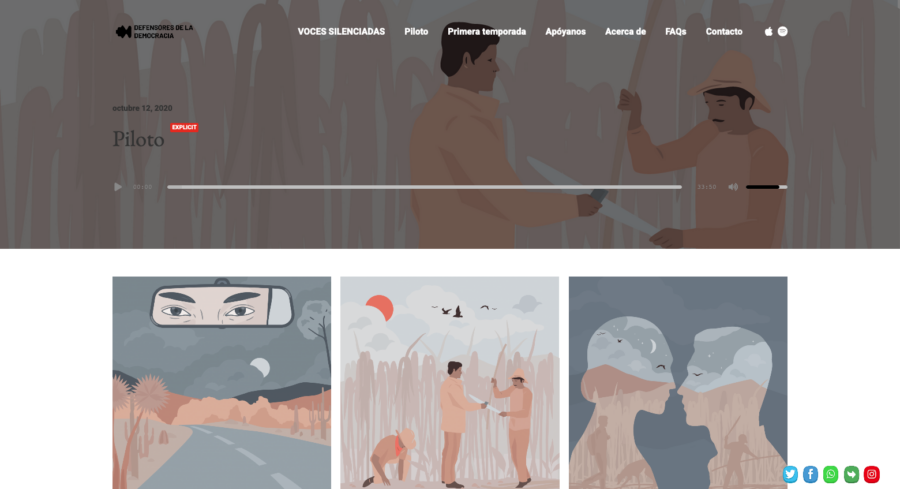 The Brown Institute is pleased to announce the launch of Voces Silenciadas (Silenced Voices in English), a podcast by Alejandra Ibarra Chaoul launched from the Magic Grant project Democracy Fighters (ddld.mx). Both Voces Silenciadas and Defensores de la Democracia are representative of Alejandra’s unending commitment to the stories and legacies of murdered journalists in Mexico.

Voces Silenciadas is a Defensores de la Democracia podcast co-produced by Antifaz. It was supported by The Brown Institute for Media Innovation and exists because of the Ford Foundation’s support. You can subscribe to Voces Silenciadas on Spotify, Apple Music, or wherever you get your podcasts. Listen to the trailer at vocessilenciadas.mx.

Voces Silenciadas, stemmed from analyzing and reading thousands of clips authored by journalists killed in Mexico, available in the first living archive that preserved them.

When we started Voces Silenciadas we took a leap of faith. We had no idea what would be hidden behind each story. The only certainty we had was that journalists killed in Mexico deserved to be remembered and their stories deserved to be told.

Our pilot episode is about Veracruz, the most lethal state for reporters in the country. We address violence statistics, corruption problems and its geographic location as a means to explain how this state is akin to a perfect storm when it comes to freedom of expression.

This is the state where Ricardo Monluí Cabrera lived. He was a local reporter who founded his own media outlet. In the podcast’s pilot, Moving Sands, we talk about Ricardo and his career, and why reporting in the town of Córdoba can be deadly.

After Ricardo’s story was published, we spent nearly a year investigating the life and death of another local reporter: Nevith Condés Jaramillo. Nevith lived in the town of Tejupilco, in southern State of Mexico, which is part of a region known as Tierra Caliente. As we got deeper into the local context, Nevith’s story became increasingly nuanced.

We decided to dedicate the entire season to understand the life, death and universe Nevith lived in. Throughout the podcast’s six episodes, we travel to Tejupilco, delve deep into its recent political history, and Tierra Caliente’s history as well.

Tejupilco is a small town with high marginalization and a long story of land-ownership disputes. This is also an authoritarian place that controls its people imposing silence, where organized crime has grown like wild grass in the past ten years. Nevith fought against all these structural problems by the means of doing journalism via social media.

Nevith’s story is unique and irreplaceable, but in so many ways, it is a sample case of thousands of stories of violence and a combination of factors across the country that allow for it to happen.

We believe each murdered journalist is unique, but the freedom of expression crisis in Mexico is systemic. We’re convinced that understanding, analyzing and telling their stories holds immense power. We want to walk away from one-size-fits-all solutions. That’s why we offer this tool: a way to preserve our memory, analyze from local contexts and share the result through new narratives. This podcast is our our contribution to that bet.